This article is this week's New Beginning Blog, which Cheri is writing from the Monastery's new home in Sequim, WA.

The snow has almost disappeared and people are starting to get enthusiastic about spring. The fellow who writes the gardening column in the local paper excitedly exclaimed, “We just hit 50 degrees!” He’s encouraging folks to start getting bare root shrubs and trees in the ground, but since ours won’t be available for pick up until the first week in March, I’m going to trust that’s early enough to start planting.

The fence boards are due to arrive this morning (Tuesday), post holes to be dug tomorrow, and if the time estimate is accurate, all will be completed by the weekend. Having spent a lot of years building, I’m going to approach this timeline with the old Zen adage “with the ideal comes the actual” at the ready.

There are three projects it would be heartening to get done earlier rather than later in the spring. 1) Enough of the front of the property fenced to allow us to begin the planting, safe from munching critters. 2) Install a smallish greenhouse so we can get a head start with the veggies that won’t be able to go into the ground until later. 3) Dig the trench and plant the bamboo “wall” that will create a visual barrier between us and a neighboring property that is, shall we say, less attractive than would be nice to have as our primary view. It is true these are, for us, rather expensive projects, but if we can manage it, now is the time to do them. Essentially, it’s either now or wait another year for these plants to have their best chance to get established and start growing toward their full potential. And, who doesn’t want to do that?!

I’ve gone back and forth about the bamboo since learning there is no native variety in this part of the world. However, having read many opinions on the subject, the prevailing wisdom seems to be that if it is a small part of a property, and if there are enough native plants to support native critters, no harm will be done. The type the local bamboo nursery recommends is incense bamboo (how perfect is that?), which grows to 40 feet and does well with “wet feet.” The recommendation is to plant it 20 feet or so from the property line, which will guarantee that even though this variety is a runner, it won’t run that far in 25 or 30 years. (I figure at that speed we’ll be able to catch it before it does any damage to the neighbor’s field.) 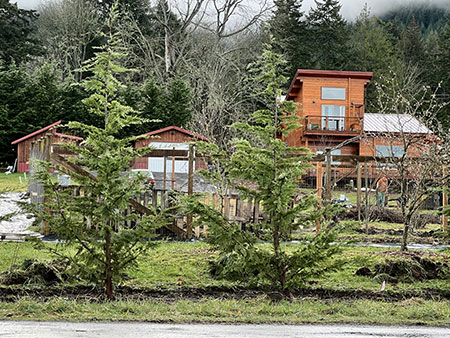 This fence is quite similar to the one we’ll be putting in. The difference is that our fence will be on the outermost edge of the property and the plantings will be inside. The first row will be the conifer privacy fence, then the various shrubs for the bird, bee, and butterfly habitat. 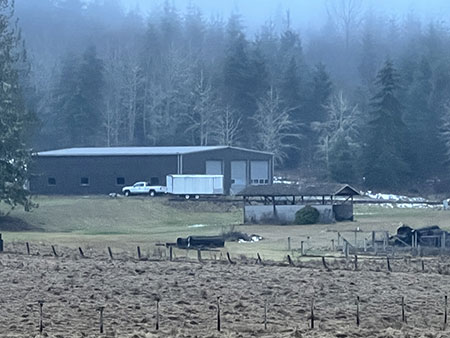 This is the view from the front of the new Zen Center that we hope the bamboo will obscure. In a picture, it looks very far away. In person it looks very near, even though it is quite far away.

And, finally, two points of great excitement here at the farm: 1) notification that “I” have planted 43 trees thus far simply by using my Aspiration card rather than another credit or debit card from a company with no such interest, and 2) a Bald Eagle stopped by to check out the pond. It was breathtaking! Now, again, maybe everyone but me has seen these magnificent creatures swoop in with their enormous wingspan, settle gracefully on a boulder, survey their surroundings with what, yes projecting here, seems a rather imperious gaze (innocent of course!), and then when satisfied with the observations, whoosh up into the air on those spectacular wings. But it was a first for me and my awe and gratitude strengthen my resolve to have every thought, word, and deed be one of reverence and honoring of Life in each and every form.

Everything Is the Buddha
Practice Corner

Monastery Wall
ARCHIVES
From the Guide

Everything Is the Buddha