When we purchased the 25 acres we were assured by our realtor, their realtor, and the owners that, yes, indeed they would certainly be cleaning up the trash left on the property. They made one trip out, filled up a trailer to take to the dump and assured me they’d be back to finish. They were not. Eventually, when it became clear they were not going to finish, our realtor suggested we put everything in a pile, take a picture of it, and threaten to sue them if they didn’t take responsibility. That was not going to happen.

Each time I spoke to someone about the possibility of cleaning up the mess, they suggested we simply dig a big hole and bury it. It would just be too expensive to haul it to the dump. That situation has been one of the biggest spiritual opportunities I can recall. Each time I walked on the property and encountered evidence of the mistreatment, I’d have to reel myself back in from what would become, if left unattended, judgment and resentment. I know there’s nothing wrong and it felt so wrong. The land is so breathtakingly beautiful. To see it having been trashed in such a careless way was painful.

Fast forward one year. I’ve mentioned that we’re surrounded by extraordinary people here in this extraordinary place, and one up at the top of our Extraordinary Humans We Are Privileged to Know is Justin. Justin, the mower. Only those who live in areas given to lush growth can appreciate the value of the person who mows! In addition to all he’s done for us, he introduced us to Eric. Eric, the hayer. Remember the beautiful big rounds of hay? That was Eric’s gift.

Getting to know Justin, we learned that he is the possessor of an excavator. (If you haven’t encountered one, it’s worth a google.) A date was made and Justin arrived with his excavator and trailer. By the end of the day he had managed to pull out of the earth, buried to various depths, 5,600 pounds of trash. Carpet, linoleum, pallets, parts of farm equipment, and just plain old garbage. Keep in mind that this was after we spent a year taking out what we could manage to lift and haul. The cost for us not to let the earth pay the price for human neglect? $1,541.00

Living without a trace is pricey and worth every penny! We were committed to leaving a pristine Monastery for the new stewards, which we did, and we are all more committed than ever to extending that “without a trace” to any and everything we can. There’s No Buy July and Buy Nothing and Terracycle and countless others devoted to do what we can to thank our mother earth rather than abusing her. Inspired to be with them.

And we take inspiration for stewardship everywhere:

This is how the folks at our local WSU Clallam County Master Gardeners Demonstration Garden protect the birds and the nest in the rafters of an outdoor pavilion. 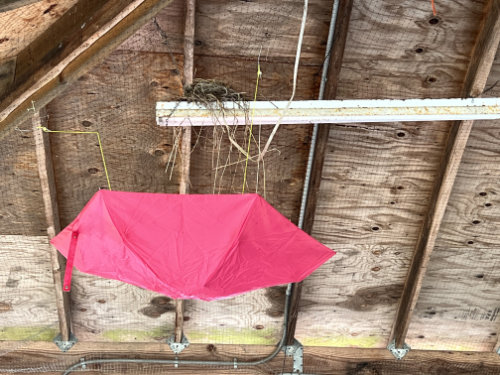 At 4 Acres, the spirit of stewardship continues

Admittedly, we were pretty much horrified at what had been done to this tree. Yes, the artwork is impressive and, yes, the tree seems as if it will survive, but we really didn’t want to be reminded of the desecration any more than absolutely necessary. Hence… 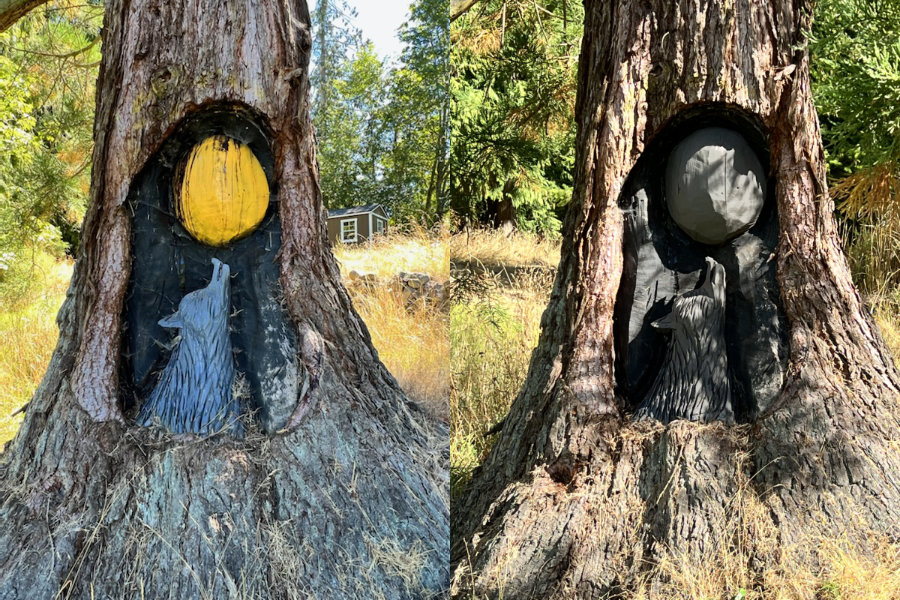 One of the aspects of the new property we fell in love with straightaway was the greenhouse. Adorable. As we began to be in relationship with it, we realized it would benefit from a goodly dose of lovingkindness as well. Here it is returned to its adorable origins. 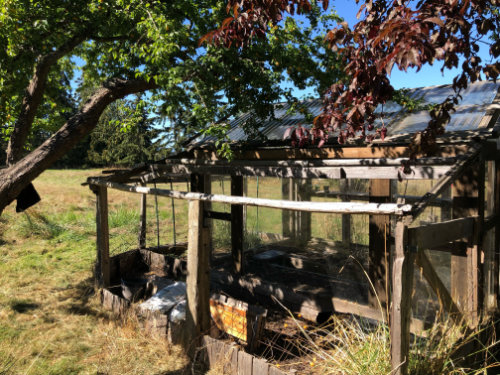 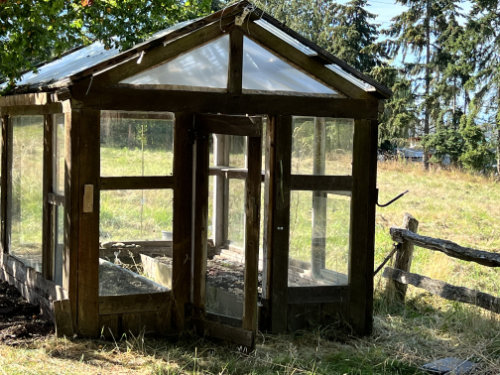 In Zen there’s an expression: With the ideal comes the actual. I don’t know if this applies equally across the board, but I’m suspecting it’s particularly applicable in the world of real estate. The garage was a mess but with good bones. Yes, it was pretty trashed, but that was only on the surface. Get down below the sheetrock and find a solid little building. Not even close. The head carpenter reclaiming the structure has said on a number of occasions as he encountered yet another “Good grief, I can’t believe…” situation that, “I can’t believe this thing was still standing.” Just as one little example to give you an idea, it wasn’t attached to the ground. Lucky for us, this chap is a building genius and he is putting all to rights for us. Now he says, “Whatever happens short of a direct hit by a bomb, this building will stand.” Very comforting. Plus, it has become quite attractive. 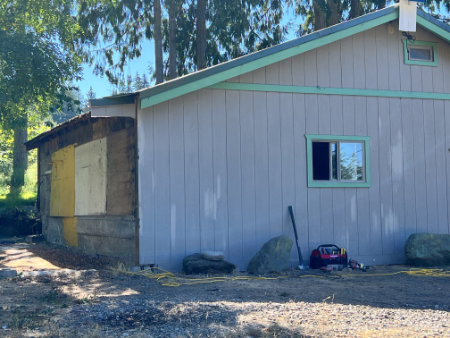 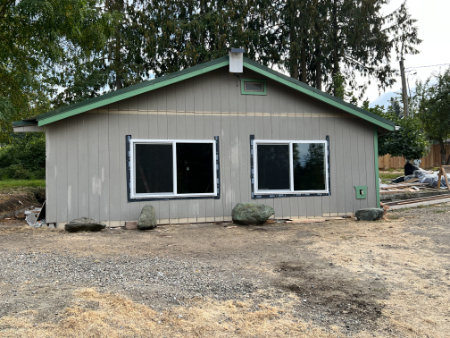 As the fellows work on reclaiming the garage, there’s a lot of leftovers. We scrounged and salvaged and came up with our first building project, a picnic table. 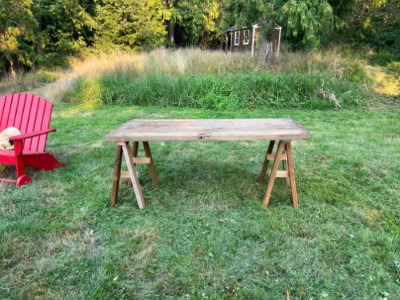 It would seem as if we’d have far less privacy “in town” than we had out on the 25 acres, but turns out that’s not true. Out in the country we had a very busy road running the full length of the front of the property. Walkers and bicyclist abounded. Here, tucked back from the street, neighbors between us and the traffic, an empty field and a wooded city park on the sides, and woods down to a creek in the back, we have seclusion and privacy.  To ensure that the folks “up the hill” aren’t troubled by what we’re up to, a fence to protect the privileged environment has gone in. 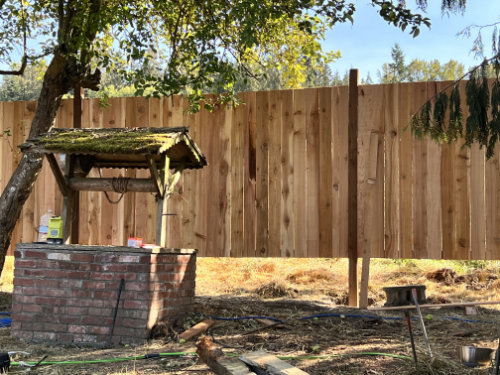 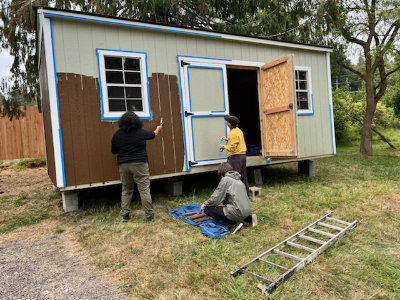 The “bathhouse” gets to be Monastery brown.